Feel free to post comments in the Comments section at the end.

Multiple hypothesis testing, or “the more you look the less you find”

In this post I study different methods of correcting for multiple hypothesis testing, which occurs often in practice when searching for anomalies in multiple datasets or for example when making catalogs in Astronomy.

Let’s start from the basics and illustrate what does it mean to have multiple tests.

NOTE: this notebook is available for download in my GitHub repository. If you have suggestion/edits, feel free to open an issue or send a pull request there. If you are running this notebook, first you need to execute the last cell, which contains the helper code

In this post I assume familiarity with some concepts, in particular statistical tests, null vs alternative hypothesis, p-value, type I error and type II errors. If you need a refresher, look in your favorite textbook or on Wikipedia.

Let’s consider the problem of determining whether two populations have the same average or not. The null hypothesis is that the average is the same, the alternative is that it is not.

Note that you can substitute this problem with any other problem answerable with a statistical test and all the discussion here will still hold (but of course you need to rework the code).

The test appropriate for the problem at hand is the Student’s T-test. Let’s write the function that computes the p-value and a function that decides whether the null is rejected or not based on the p-value:

We now generate 1 dataset with the null hypothesis true, and apply the test. We will use a type I error probability $\alpha=0.05$:

The test worked as expected, and didn’t reject the null hypothesis (which we know is true). Let’s verify that the performance of the test is nominal, i.e., that by repeating a large number of independent realizations of the same experiment we reject by chance the null hypothesis with the nominal type I error probability $\alpha$:

ok, it works as expected.

Let’s now imagine that we have $m$ pairs of populations, and we want to find out whether one or more pairs have a significant difference between the populations.

Can we just apply the test separately to each pair and see if it rejects for at least one? (spoiler: the answer is no! Also, let’s neglect the fact that there are other tests designed for this situation, like ANOVA). Let’s see:

At first this result might come as a suprise. After all, we know that the null hypothesis is true!

However, if you recall the definition of Type I error probability, by fixing $\alpha=0.05$ we are setting up the test so that it will wrongly reject the null with 5% probability. Therefore, by repeating the test 50 times (one for each pair) we had each time a 5% chance of a type I error. The probability of having at least a rejection is hence given by the Binomial distribution:

There is over 90% chance to get at least one false positive in our setup. Testing multiple times an hypothesis as part of the same question is called “multiple testing” and require some more thoughts.

Bonferroni (1936) introduced a simple correction for situations like this. The prescription is to substitute $\alpha$ for each one of the $m$ independent tests within the composite test with a corrected type I error probability given by the Sidak formula $\alpha^{\prime} = 1 - (1-\alpha)^{1/m}$ (which for large $m$ is often approximated with $\alpha^{\prime} = \alpha / m$).

NOTE: we assume independent tests. If there is correlation between the different tests, the methods presented here might or might not apply, you need to look closer at the relevant papers.

That looks better. In order to make sure, let’s generate a lot of synthetic datasets as earlier and let’s see if our Bonferroni-corrected test provides the nominal type I error probability $\alpha=0.05$:

It worked. The type I error probability is indeed very close to the nominal 5%.

It is clear that the Bonferroni correction will still guarantee a global $\alpha$ type I error probability of rejecting one or more nulls by chance, but it penalizes all tests in order to do so, because $\alpha$ for each test is given by the Sidak formula and $1 - (1-\alpha)^{1/m} < \alpha$ for $m > 1$.

Moreover, as $m$ grows the global null hypothesis is still tested with the same type I error probability, but each of the $m$ null hypothesis get tested more and more restrictively, and as $m \to \infty$ we have $\alpha^{\prime} \to 0$, so it would be extremely difficult to find any deviation from the null hypothesis. In other words, “the more you look, the less you find”.

Let’s illustrate this by considering the Type II error of one single test, i.e. the probability of not rejecting the null when we should have. First let’s generate and test a pair where the null is false:

We have rigthfully rejected the null hypothesis. Now let’s see how many times we fail to reject the null even if it is false over many repetitions of the same experiment (type II error probability):

So for one test we have a probability of around 6% ($\beta = 0.06$) of not rejecting the null even if it is false (of course, $\beta$ depends on $\alpha$ as well as on the size of the effect, in this case the difference between the two averages).

Now let’s see what happens if we use the Bonferroni-corrected test on 50 pairs where only one has the null hypothesis false:

Now we have a 41% probability of not rejecting the null when we should have. We clearly have lost a lot of sensitivity now that the difference in one pair is buried in a sample of 50 pairs.

To some extent, this is inevitable and it is the price we pay for not knowing exactly where to look.

However, when trying to test all the local null hypothesis instead of the global one, things get out of hand very quickly. In order to get an idea, let’s make several larger and larger datasets with 50 false null hypothesis each, and see how the type II error changes as a function of the number of pairs/tests $m$: 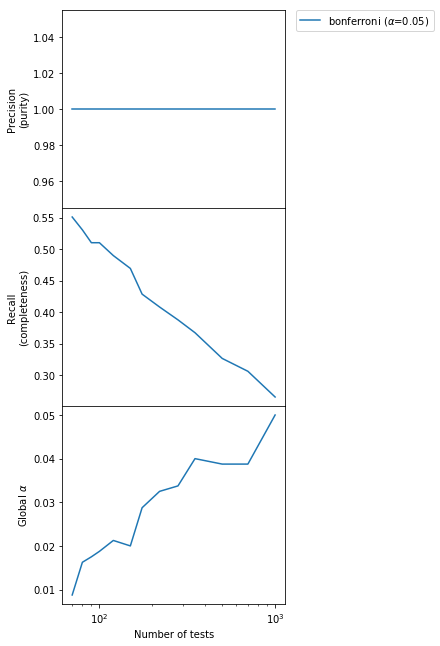 We can see that the purity of the output sample is constant to 1.0, but the completeness is small and it also falls very quickly as the number of tests increases. In other words, we are detecting less and less anomalies as $m$ increases but the ones we detect are always correct. The type I error probability of detecting any false positive is below the declared $\alpha$ level always, although very conservatively so for small $m$.

Can we do better?

The answer is, fortunately, yes!

There are several corrections that have been proposed to the vanilla Bonferroni/Sidak method. You can find them described here. Without going into the details of each one of them (see the Wikipedia page for that), let’s just test them: 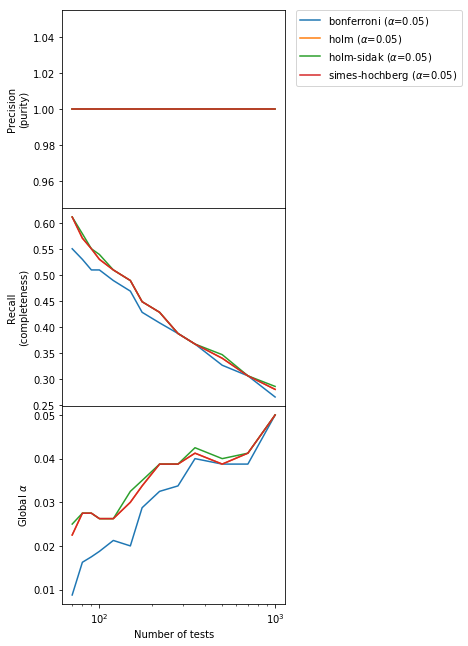 The new methods conserve the absolute purity of the vanilla Bonferroni and a type I error below or at the nominal value, but improve a little bit the completeness. However, we can do a lot better than this! Let’s see how.

Up to now our solutions to the multiple hypothesis testing problem have been trying to keep under control the FWER, i.e., the rate of type I errors committed in the entire set of $m$ tests (what we called the global $\alpha$ in the plots above).

However, in the case where we expect several “detections” (i.e., several false null hypothesis) we can sacrifice a little our desire for complete purity and decide that we can accept a controlled amount of false positives if this helps improving sensibly the completeness. In other words, we can accept to have a certain amount of “impostors” in our output sample of detections. This is the idea behind the FDR.

Benjamini and Holdberg (1995) presented a procedure that does just that. There, $\alpha$ does not represent anymore the type I error probability, but rather controls the purity of the output sample (i.e., directly affects the Precision instead of the global $\alpha$ as our previous methods). The (expected) Precision is guaranteed to be $> 1 - \alpha$.

As before, we refer to the paper for details. Here I want to illustrate the difference with respect to our earlier methods. Let’s use the same procedure as before. For simplicity, let’s consider only the best method for our problem among the Boferroni-like ones according to the previous plot (“holm-sidak”): 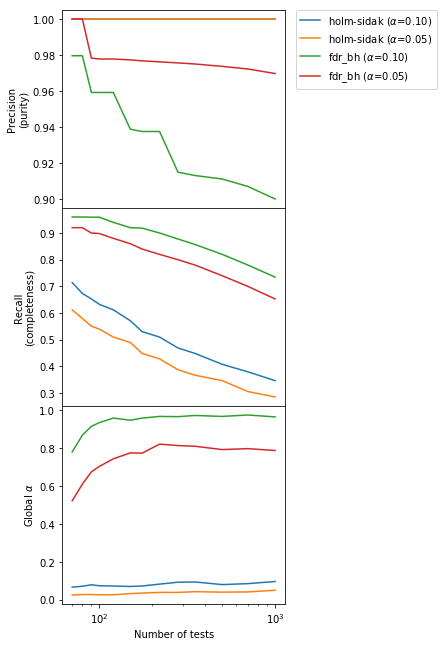 We can immediately see that the BH method provides a much larger Recall (“completeness”, second panel) by sacrificing a controlled amount of Precision (“purity”). Indeed, as promised the Precision is $> 1-\alpha$. Going from $\alpha = 0.01$ to $\alpha = 0.05$ in the BH method increases as expected the purity but decreases the completeness. Also, the global $\alpha$ (bottom panel) for the BH method is large and close to 1, which means that in any experiment there is a high probability of getting one or more false positives. This is the price to pay for increasing the completeness, where we gain almost a factor of 2 especially for large and very large number of tests $m$ with respect to Bonferroni-like methods.

Now we understand the key difference between FWER-controlling and FDR-controlling methods: the former put an upper limit $\alpha$ on the FWER (“global” $\alpha$, bottom panel), while the latter put a lower limit $1 - \alpha$ on the Precision (“purity”, upper panel). 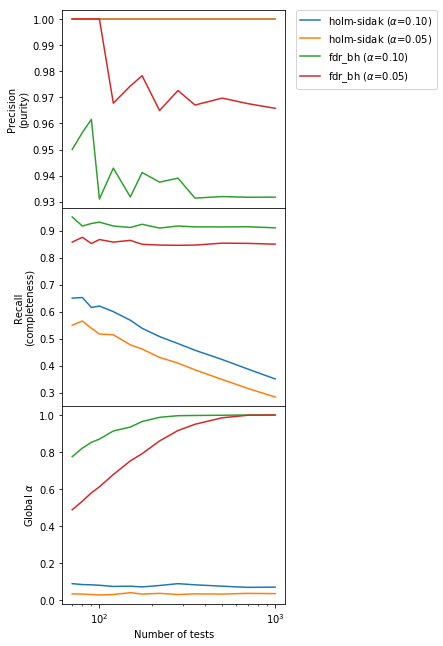 Results are similar as before, but now the completeness for the BH method is essentially constant independently of $m$.

We have illustrated the problem with multiple hypothesis testing, and two very different methods of dealing with it.

NOTE: in this illustrative example we used one single effect size for all false null hypothesis. This is almost never the case in reality, so the distribution of the differences (for example the luminosity function for Astronomical sources) is going to affect obviously the number of anomaly detected. However, the general idea presented here still holds. In the case of an Astronomical catalog, for example, using the FDR instead of the FWER allows to detect fainter sources (increase the sensitivity) at the expenses of some false discoveries.